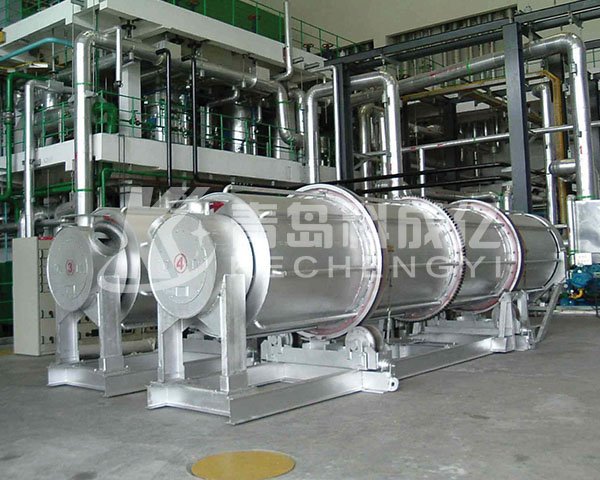 The drum type ash cooler is a drum type heat exchanger used for cooling the bulk material, the structure and heat exchanging process of which are different from that of the usual heat exchanger. For the drum type ash cooler, three methods of heat transfer as thermal radiation, conduction, and convection are working in the same time, and primary cooling medium is water and the secondary is air. It is a high efficiency ash cooling equipment, which is designed to meet the requirement of the large-volume CFB boiler. The drum ash cooler consists of drum, ash filling device, ash discharge device, drive device, transmission device, cooling water system and electric control device, which is specifically used for the hot ash cooling of CFB boiler

Drum: it is composed by the inner drum and outer drum, and form an enclosed water cavity together with rotary joint and water return pipe. The inner wall of the inner drum has welded with spiral-arranged screw blades and longitudinal blades, which can transfer the heat of slag to the circulating cooling water by thermal conduction, convection and radiation.

Ash falling device: it is made up of manhole, expansion joint, ash falling pipe, ash tank, ash sealing device. The boiler bottom ash will fall into the drum of the ash cooler through the ash filling pipe. The ash tank has a negative-pressure sealing port. The ash sealing device can prevent the ash from leaking by the anti-spin action.

Ash discharge device: it is composed of ash outlet sealing cover and ash outlet, and installed with negative-pressure air port and ash discharge port. The sealing cover is made up of two removable parts (upper and lower parts), which is convenient for maintenance.

Cooling water system: it is made up of rotating joint, water pipe to drum, return water pipe, metal hose. This system can bring away the heat absorbed from the ash. The rotating joint distributes the inlet water and return water evenly at the outlet end, which is convenient for maintenance and safe as well. The rotating joint is equipped with safety accessories as pressure meter, RTD, safety valve. Those accessories can be installed on the cooling water pipeline in accordance with the requirement of the works.

Electric control device: it mainly refers to the electric control cabinet and related control instrument, which can supply power and control signals to ash cooler. It can send out remote signal to achieve remote control.

The model of ash cooler is GTL (S) D – n ×L (left or right), among which, D  stands for drum diameter (mm), including 700mm, 800mm, 1000mm, 1200mm, 1500mm, 1800mm, and 2000 mm; n stands for the capacity (t/h); L stands for the distance between inlet and outlet (mm). According to the different installation positions, the ash cooler can be classified as left type and right type, facing the ash cooler outlet, it is left type if the motor on the left and is right type if the motor on the right. The length of the ash cooler is not fixed, which is usually related with the capacity, ash temperature, and the rated distance between the inlet and outlet. The output of ash cooler is 0 – 80t/h. And the cooling temperature is 80 – 150℃

When the foundation is higher than the ground, pour two longitudinal or four transverse plain concrete strip foundations with strength more than C30 on the ground. When the left type and right type ash cooler are arranged next to each other, for the convenient maintenance and repair, the drive motor should be arranged at the outer side, which means put the left type ash cooler at the left side, and the right type at the right side.

2)      Large internal space, which is convenient for inspection and easy for maintenance with a low cost.